After the release of his debut EP, Face Plants, Lecx Stacy has dedicated his voice to protest the current state of racial injustice incarnated in the anti-police brutality anthem, “Crooked Smile.” The track was released in June but has now been reimagined in a new music video. The San Diego-based singer-songwriter and producer found a new production angle to mirror the change in focus, turning his eclectic blend of atmospheric, immersive indie-pop textures to a brash, showcased on the EP to an industrial proclamation against racial violence. He described the pulsing, war-chant of a single in saying, “I put this song out on a week’s notice as a gut reaction to everything going on. It was important for me to have direct imagery for the song. I didn’t want anyone that I worked with to hold back.”

The music video is an appropriate interpretation of the in-your-face bluntness of the track, furthering its direct approach by giving the majority of the video’s run-time to flashing lyrics on a television. The video is shot in a basement chamber of sorts, lit only by grimly repurposed blue and red police lighting and depicts a Cronenberg-esque mannequin of a police officer sitting on a roman column, satirizing the sad state of our pillars of justice. An angel of death tarot card in one hand and ‘asshole’ written on his hat, the grainy television on his lap displays lines like, “One for one for all the bodies on the curb / Tell these pigs that they all gon’ fucking learn.”

Lecx and Terrible Records have partnered with Charlie Staunton, owner of L.A. based Virgil Normal, to release a shirt design to drop alongside the video. All proceeds from sales of the shirt are being donated to the Milwaukee Freedom Fund in light of the unjustified shooting of Jacob Blake. The collaboration came to fruition when Lecx, “hit up Charlie who is like this local legend that has a shop in L.A. called Virgil Normal and he fucked with what I wanted to do and say with my music. He drew all of that by hand. All of that means a lot to me, so I’m thankful to everyone that helped and was involved in the process.”

Find the links to stream “Crooked Smile” and pre-order the collaborative shirt here. 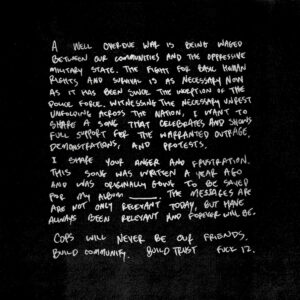 Blood Cultures continue an unsettling, uproarious run of singles with “Beneath the Moon & Me” [Video]

Pritt opens up on her ‘Transparency’ EP

SG Lewis teams up with Channel Tres and Robyn on “Impact”