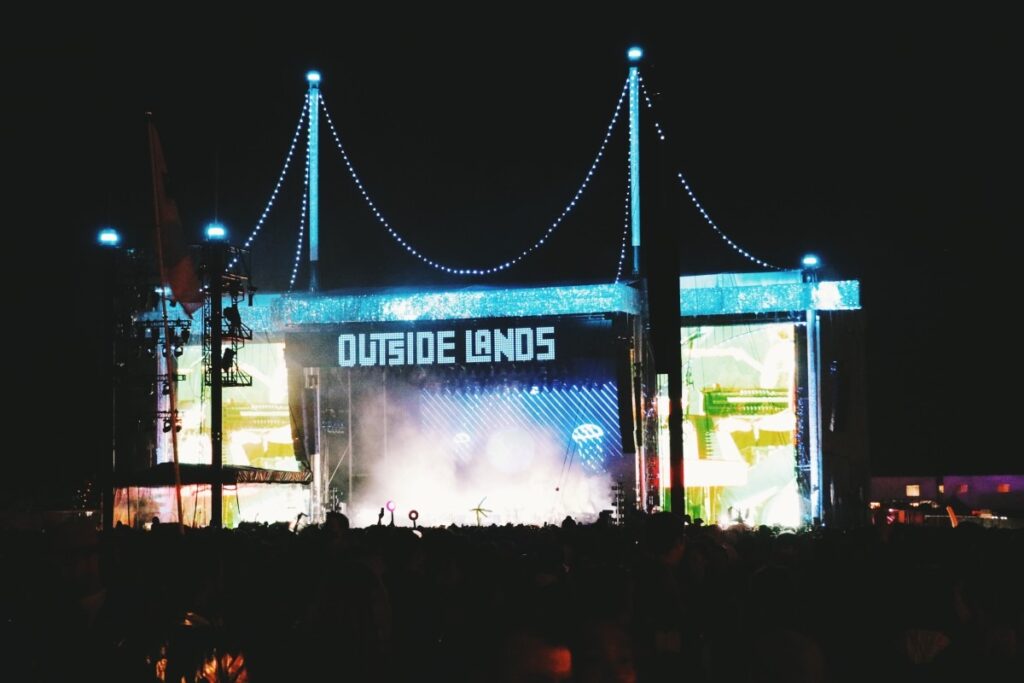 From offering one of the year's best and most diverse musical lineups to its historic location, this year's Outside Lands offered something to everyone. From being Vampire Weekend's only live show of 2021, to the eclectic mix of nostalgic acts when compared to rising stars, Outside Lands delivered. In addition to more than 100 musical acts, there were a wide variety of food vendors and the unique curated cannabis experience of Grasslands (which featured an interactive art wall). Outside Lands was also characterized by an overwhelming sense of gratitude from both artists and fans alike for the return of festivals and live music to the San Francisco Bay Area.

Day One commenced like the feeling of reuniting with a long lost friend or relative after many years. There was a feeling of intense elation in the air as festival goers entered the vibrantly colored spray painted tunnel where they were transported into a musical utopia. Everyone was dressed in costumes to celebrate Halloween weekend and the official return of music to the beloved San Francisco Bay Area.

Friday started off on a high note with rising soulful indie star Moses Sumney bared his soul, giving a triumphant and memorable performance on the beloved Sutro Stage. Next up was vibey, electro soul band DRAMA, composed of producer Na'el Shehade and vocalist/songwriter Via Rosa, who delivered an emotional performance on Sutro. Festival attendees were mesmerized by Via Rosa’s vocals and Na'el Shehade's hypnotic beats. Meanwhile delightfully groovy indie band Khruangbin performed a lively set on the main festival stage, Lands End. The Texas based band has quickly rose to stardom as one of the most promising up and coming indie bands around as a result of their infectiously dynamic sound (found on albums like Mordechai) and electrifying live set, which did not disappoint.

Day One continued on Lands End with an energetic and extremely dance worthy set from the beloved Glass Animals. Performing songs off of all three of their albums, their kaleidoscopic visual set-up completely stole the show. Their visuals elegantly incorporated elements from their 2020 album, Dreamland. Throughout their entire show, frontman Dave Bayley kept the audience engrossed through his massive star power. A huge surprise was when Glass Animals brought out surprise guest Denzel Curry for his verse on their single "Tokyo Drifting."

The Friday night lineup was jam packed. Grammy-award winning producer Kaytranada shared his signature blend of sultry hip-hop electronica crossover beats on Sutro. Over at Twin Peaks, Tyler, The Creator was all the talk. And Day One headliners The Strokes rocked the house on Lands End. With a career spanning more than two decades, The Strokes have time and time again reclaimed the thrown as the kings of rock and roll. The high point of their performance was when they performed their massive hit “Last Nite," which got everyone in the audience dancing.

Saturday afternoon started off with fun sets from indie pop band ARIZONA, followed by indie pop star Melanie Martinez. Throughout her career, Martinez has become known for her playful persona and bubble gum pop meets experimental indie leaning music. Martinez was supported by amazing dancers performing fun choreography, while colorful visuals of images such as teddy bears were projected in the background. A multi-dimensional musician, at points during the show Martinez even played the harp.

Following that many attendees headed out to catch Dr. Dog's set on his final tour while hip-hop fans headed to catch last minute addition, Aminé on Lands End. Meanwhile electronic fans headed to Twin Peaks to catch Shiba San. His highly energetic set was the perfect way to kick off Saturday evening. Fans were enthralled by his dynamic sound, which was complemented by his vibrant visuals.

Next up was Vampire Weekend performed their only set of 2021 on Lands End. Mainly playing songs off of their acclaimed 2019 album Father of the Bride, Vampire Weekend also played some iconic songs from their earlier years. With a career spanning longer than a decade, the band demonstrated that they can truly jam while sharing a harder rock sound than in previous performances.

It was then a quick return to Sutro where Reggie Watts put his multi-dimensional talents on display. Watts proclaimed his love for death metal and medicinal ketamine while performing a live looping set that hypnotized his audience while helping them reach higher levels of consciousness. Throughout his set, Watts cracked jokes keeping his audience fervently entertained.

ZHU returned to his hometown to close out Saturday night on Twin Peaks. He took center stage with a spooky Halloween leaning look, wearing a chainmail mask and using a microphone stand designed to look like a scythe. Performing an official Dream Tour set, ZHU performed songs off the album including "Came for the Low" as well as familiar favorites such as "Cocaine Model." ZHU was supported by a three-piece band composed of a guitarist, drummer, and saxophone player that significantly raised the overall vibe of his set.

Wearing a colorful green leotard, Lizzo kicked off her set with her latest single "Rumors" featuring Cardi B. Her set focused on her many hits off of 2019's Cuz I Love You while fans of the superstar sang along. She was backed by an all female rock band and an entourage of dancers who she twerked with at several points throughout the show. Lizzo even made a TikTok with her audience during her set that went viral. An hour into her performance, she left the stage only to return in a Squid Game mask and dress with her dancers dressed in costume as henchmen. In the spirit of Halloween, her and her dancers then proceeded to do the “Thriller” dance before Lizzo finally closed out the night with her anthem “Truth Hurts.”

On Day three Nelly kicked off the party while performing many throwback tunes as well as tracks off of his latest album Heartland. All the meanwhile indie rock music favorite Goth Babe drew a decent crowd. His musicianship and emotive lyrics captivated his audience as he laid down a super low-key but nearly flawless set on Sutro. The Sunday Halloween party really got started with TroyBoi on Twin Peaks who entranced his audience with his catchy trap infused beats.

Live electronica took center stage on Sunday with RÜFÜS DU SOL on Lands End and Sofi Tukker performing on Sutro. Hot off the release of their newest album Surrender, RÜFÜS is currently on a worldwide tour in support of their latest musical effort. Their euphoric electronic set was largely enhanced by their impressive live instrumentation and the vocals of the group's singer Tyrone Lindqvist.

Kicking off their set with their hit track "Eyes" from their 2018 album SOLACE, fans sang along as RÜFÜS performed live renditions of various songs featured across their discography. RÜFÜS didn't shy away from performing familiar favorites such as "You Were Right" and "Underwater" while also throwing in their latest tracks, "Alive," "On My Knees," and "Next to Me."

Next up was live house duo Sofi Tukker on the Sutro stage. Similar to RÜFÜS DU SOL, Sofi Tukker's set and productions focus predominantly on the fusion of electronic beats and live instrumentation. With an emphasis on guitar, Sofi Tukker's performance was a multi-dimensional experience, which combined indie pop, house music, and indie rock. Sofi and Tukker's radiant personalities heightened the audience's vibe while fans danced and swayed freely to the beat.

R&B starlet Kehlani closed out the festival on Sutro, delivering one was the most impressive sets of the entire festival. Showcasing superb production and an uplifting vibe, the star took center stage backed by an extremely talented all-female band and a group of mega talented female dancers. Her set featured impressive visuals, awe inspiring choreography and larger than life pyrotechnics. As Kehlani shared her soulful and smooth vocals, she playfully interacted with the crowd and asking them to sing along to her hits.

Closing out Ends End was festival headliner Tame Impala. Their live performance was uplifting and inspirational while showcasing kaleidoscopic visuals. Performing hit after hit from “Let It Happen” to “The Less I Know the Better," Kevin Parker and his band hypnotized fans with their live performance.

Tame Impala's leaned into some of their older tracks off of 2012's Lonerism and 2015's Currents while also leaning a bit into 2020's The Slow Rush. In the spirit of Halloween, right before their performance an announcement was made that "The Wiggles" would replace Tame Impala at Outside Lands. Playing a theme song from a children's TV show, Tame Impala emerged in Wiggles garb before finally revealing their true selves. Ending their set with hit singles "The Less I Know The Better" and "New Person, Same Old Mistakes," Tame Impala left their audience awe struck and vibing high.

Altogether Outside Lands 2021 delivered a much needed uplifting festival experience to the San Francisco Bay Area that felt like home. The festival's top highlights were empowering female performances including Lizzo and Kehlani and invigorating indie rock sets from the likes of Glass Animals and Tame Impala. Paired with Grasslands, a large amalgamation of various food and wine vendors, beautiful decor, amazing stage production, and the impressive costumes, Outside Lands 2021 delivered a thoroughly enjoyable experience for attendees. The dates for Outside Lands 2022 have already been announced. The anticipation is expected to drastically build throughout the coming months as we get closer to the festival.