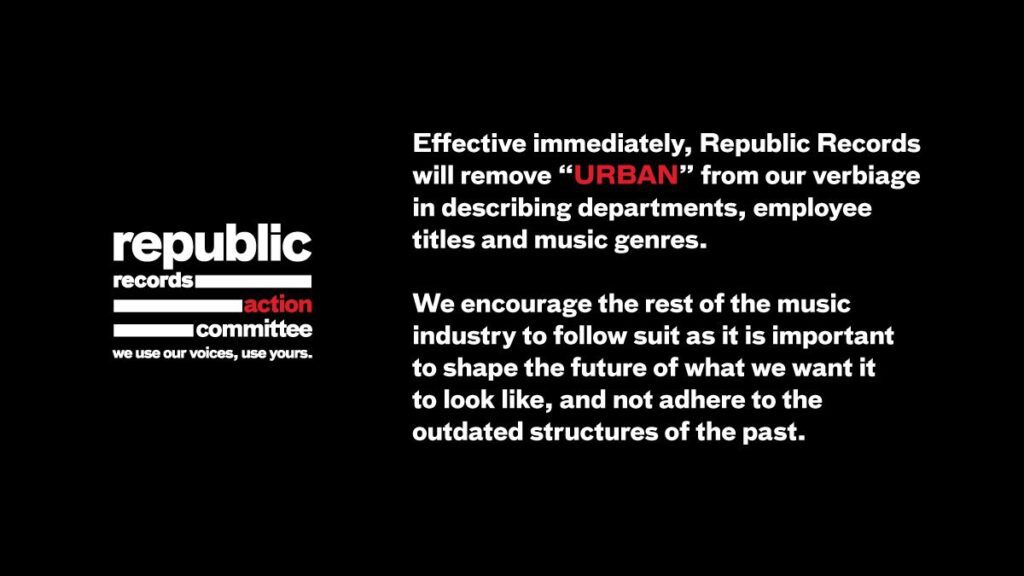 Many people and companies are taking different approaches to being allies and supporting the Black Lives Matter movement these past two weeks. While donations, activism, petitions, and protests are the most common, Republic Records is taking a step at correcting one of the institutional examples of racism that have been a part of the music industry for decades.

In a post on social media yesterday, the Universal-owned label says it will “remove ‘urban’ from our verbiage in describing departments, employee titles and music genres.” The descriptor was often given to various forms of black-created music, whether or not the artist he- or herself was from any urban area.

It adds: “We encourage the rest of the music industry to follow suit as it is important to shape the future of what we want it to look like, and not adhere to the outdated structures of the past.”

Writes Music Business Worldwide, “Republic’s artist roster – via its industry partnerships – includes The Weeknd (via XO) and Drake (via OVO), in addition to the likes of Ariana Grande, Taylor Swift and Justin Bieber.”

The record label’s statement actually comes a day after management company Milk & Honey said they would eliminate “urban” from their company, as well.

MBW ran a report in 2018 in which “a run of senior executives in the global industry expressed their growing unease with the term ‘urban music.’” You can read that here.

Skrillex & J Balvin Have A Collab Coming According To NYC Hoverboarder

Memorial Site Dedicated To Avicii To Be Made In Stockholm

Will Smith, The Chainsmokers & More Team On NASCAR-Based RomCom For Amazon Studios